The following is from an interview with David Godman.

Harriet: You say that Maharaj never visited other teachers because he no longer had any doubts. Did he ever talk about other teachers and say what he thought of them?

David: He seemed to like J. Krishnamurti. He had apparently seen him walking on the streets of Bombay many years before. I don’t think that Krishnamurti noticed him. Afterwards, Maharaj always spoke well of Krishnamurti and he even encouraged people to go and see him. One day Maharaj took a holiday and told everyone to go and listen to Krishnamurti instead. That, I think, shows a high level of approval.

The most infamous teacher of the late 1970s was Osho, or Rajneesh as he was in those days. I once heard Maharaj say that he respected the state that Rajneesh was in, but he couldn’t understand all the instructions he was giving to all the thousands of foreigners who were then coming to India to see him. Although the subject only came up a couple of times while I was there, I got the feeling he liked the teacher but not the teachings. When Rajneesh’s foreign ‘sannyasins‘ showed up in their robes, he generally gave them a really hard time. I watched him throw quite a few of them out, and I saw him shout at some of them before they had even managed to get into his room.

I heard a story that he also encountered U. G. Krishnamurti in Bombay. I will tell you the version I heard and you can make up your own mind about it. It was told to me by someone who spent a lot of time with U. G. in the 1970s.

It seems that Maurice Frydman knew U. G. and also knew that he and Maharaj had never met, and probably didn’t know about each other. He wanted to test the theory that one jnani can spot another jnani by putting them both in the same room, with a few other people around as camouflage. He organised a function and invited both of them to attend. U. G. spent quite some time there, but Maharaj only came for a few minutes and then left.

After Maharaj had left Maurice went up to U. G. and said, ‘Did you see that old man who came in for a few minutes. Did you notice anything special? What did you see?’

U. G. replied, ‘I saw a man, Maurice, but the important thing is, what did you see?’

The next day Maurice went to see Maharaj and asked, ‘Did you see that man I invited yesterday?’ A brief description of what he looked like and where he was standing followed.

Then Maurice asked, ‘What did you see?’

Maharaj replied, ‘I saw a man Maurice, but the important thing is, what did you see?’ 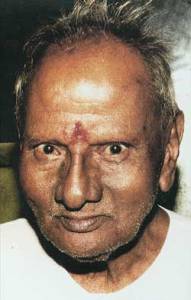 When Maharaj told Rudi that he had no interest in visiting other teachers, it was a very true statement. He refused all invitations to go and check out other Gurus. Mullarpattan, one of the translators, was a bit of a Guru-hopper in the 1970s, and he was always bringing reports of new teachers to Maharaj, but he could never persuade him to go and look at them. So, reports of meetings between Maharaj and other teachers are not common. Papaji ended up visiting Maharaj and had a very good meeting with him. In his biography he gives the impression that he only went there once, but I heard from people in Bombay that Papaji would often take his devotees there. He visited quite a few teachers in the 1970s, often when he was accompanying foreigners who had come to India for the first time. It was his version of showing them the sights. They would never ask questions; they would just sit quietly and watch what was going on.

Harriet: What was Maharaj’s attitude to Ramana Maharshi and his teachings? Did you ever discuss Bhagavan’s teachings with him?

David: He had enormous respect for both his attainment and his teachings. He once told me that one of the few regrets of his life was that he never met him in person. He did come to the ashram in the early 1960s with a group of his Marathi devotees. They were all on a South Indian pilgrimage tour and Ramanasramam was one of the places he visited.

With regard to the teachings he once told me, ‘I agree with everything that Ramana Maharshi said, with the exception of this business of the heart-centre being on the right side of the chest. I have never had that experience myself.’

I discussed various aspects of Bhagavan’s teachings with him and always found his answers to be very illuminating.

He asked me once, ‘Have you understood Ramana Maharshi’s teachings?’

Since I knew he meant ‘Had I actually experienced the truth of them?’, I replied, ‘The more I listen to Maharaj, the more I understand what Bhagavan is trying to tell me’.

I felt that this was true at both the theoretical and experiential levels. His explanations broadened and deepened my intellectual understanding of Bhagavan’s teachings and his presence also gave me experiential glimpses of the truth that they were all pointing towards.

I have to mention Ganesan’s visit here. V. Ganesan is the grandnephew of Ramana Maharshi and in the 1970s he was the de facto manager of Ramanasramam. Nowadays, his elder brother Sundaram is in charge. Ganesan came to visit Maharaj for the first time in the late 1970s. As soon as he arrived Maharaj stood up and began to collect cushions. He made a big pile of them and made Ganesan sit on top of the heap. Then, much to everyone’s amazement, Maharaj cleared a space on the floor and did a full-length prostration to him.

When he stood up, he told Ganesan, ‘I never had a chance to prostrate to your great-uncle Ramana Maharshi, so I am prostrating to you instead. This is my prostration to him.’

You can read more from Nisargadatta Maharaj here.