Was Rabindrinath’s longing, his creative angst, the very thing that in the end became an obstacle to his enlightenment? Am I also destined to die with tears in my eyes, and a pocket full of songs?

Milarepa, a poet is not in search of truth. His search is for beauty, and through the search for beauty nobody has ever become enlightened. One can become a great poet, a great painter, a great singer, a great dancer; but on the path of beauty, enlightenment is not possible.

Rabindranath was very close to enlightenment, but his search was not for enlightenment – he was searching for the beautiful. And the search for the beautiful, deep down is the search for expressing beauty – in words, in music, in dance, in any kind of creativity. The seeker of beauty is really seeking a vision which he can reproduce in his poetry, in his song, in his painting. Always the search is inner, but the goal is somewhere outside. And that’s the problem for all great creative people: they come to know, but then expression becomes difficult; they come to experience beauty, but how to share it? You may see a rose flower and be suddenly overwhelmed by its beauty, but how to share it? How to express it?

The concern of the artist is expression; the concern of the seeker is experience. Neither of them is able to express, but because the seeker of truth is totally concerned with experiencing, he comes to enlightenment, and he can die with a smile on his face, with fulfillment, whether he has been able to say something about it or not – that is not his concern, that is not his angst, his anxiety.

The artist also comes to know what he is seeking, but his problem is that basically, his interest in seeking beauty is for expression – and expression is almost impossible. At the most you can stutter a little bit – all your songs are stutterings of great poets. They look beautiful to you, immensely meaningful and significant, but to the poet… he knows he has failed.

All artists, either in the East or in the West, have felt an immense failure. They have tried their best, and they have produced great pieces of art – for us they are great pieces of art, but for them they are faraway echoes of their experience. Hence, they die either mad….

Almost seventy percent of painters, dancers, poets have gone mad. They have made too much effort. They have put too much tension into their being, so that it brought a breakdown, a nervous breakdown. And many of the artists have even committed suicide. The wound of failure became unbearable: to live any longer and to carry the same wound, and feeling again and again… became too difficult, and it was better to destroy oneself. And those who have not gone mad or committed suicide, they have also not died in a blissful way.

The people who follow beauty are most often not very respectable – not in the same sense as the saints are. They are very natural people, very loving and very lovable, but they don’t have any ego, any idea of holier-than-thou; they remain just simple and ordinary.

I have been trying in many ways to open new doors – this is one of the most important doors. I want you to be a seeker of truth, but when you have attained to truth you should not be without songs and without dances. Beauty is a little lower value than truth, but the man of truth can express beauty more clearly than the poet, than the painter. For the higher, the lower is always understandable – not vice versa.

The man who has attained truth should also take care that his life radiates godliness, goodness. It may not be in tune with the morality of the society – it cannot be, because that morality is created by blind, unconscious people, just as a convention. For the man of truth it is not convention, it is simply his life. In utter nudity, he should make his life available to existence, to people, so that the ordinary morality of convention slowly, slowly changes into a real and authentic morality of a man who knows the truth.

The man of truth should not look at poetry and music and dance as just entertainment for ordinary people. He should make it a point, because he has risen to a height from where he can see beauty in its absolute glory. He can contribute many riches to existence : Each of his words can be a poem in itself, each of his silences can become celestial music, each of his gestures can indicate towards the most beautiful phenomenon, grace.

But this has not been so up to now – they have all followed their paths separately. I want my people to seek the truth, because by seeking it the other two will become available on their own accord. But remember, when you have experienced truth don’t forget that it is part of your compassion to give humanity new dreams of goodness, new visions of morality, ethics, which are not of the marketplace, which are not only conventions. And he should not forget that his truth is so deep inside him that the unconscious people will not be able to have a taste of it – he should create beauty in all possible dimensions.

Once in a while it has been done. For example, when the Taj Mahal was created… it was not the work of great architects, but it is the most beautiful architecture in existence. Shah Jahan, the emperor who was creating it as a memorial grave for his beautiful wife, Mumtaz Mahal – hence the name Taj Mahal – searched for years for Sufi mystics, who have no concern for beauty. He asked the Sufi mystics, “Although it is something lower, and you are not interested in it – and why should one be? – Just for my sake, you design the Taj Mahal. The architects will make it, but the design should come from those who have known beauty in its fullness, from a height.”

George Gurdjieff used to say that there are two kinds of art. One is subjective art – ninety-nine percent of art in the world is subjective: you are simply pouring your feelings, your desires, your longings, your dreams, into whatever you are making. But once in a while there is objective art – only one percent. What he calls objective art is art created by those who were not artists, who were realized people. They created music to help meditation – it was not for entertainment. They created poetry to convey that which cannot be conveyed by prose. They sang, they danced, to give you just a glimpse of their ecstasy, of their inner dance, of their joy, their blissfulness.

In India, there are many places which have objective art. Even Gurdjieff had to mention them, although he was in the West; he was born in the Caucasus, but when he was talking about objective art, he had to fall upon India. Indian classical music is not just for entertainment. Listening to it, you start going deep into yourself. It is not for all, it is only for those who are ready for an inner pilgrimage.

He mentioned the Taj Mahal, too. On the full moon night, when the moon comes just in the middle of the sky, the Taj Mahal becomes the greatest object of meditation that man has created. You just sit silently and look at it, and just looking at it your thoughts will subside. The beauty of it is so enormous that your mind simply feels at a loss. It cannot grasp it, so it becomes silent. The caves of Ajanta and Ellora, the temples of Khajuraho, Puri, and Konark… all these he mentions as objective art – objective because they are not an effort to express feelings or ideas, they are devices, so that for centuries to come people will be able to have the same taste, the same feeling, the same joy.

Now there are small plastic pyramids, glass pyramids available in the market. And people who are very much health-oriented, they just sit inside that pyramid. A small pyramid, portable – you can fold it, keep it in your suitcase – and wherever you want you can fix the pyramid up like a tent, and just sit inside it for one hour. And you will feel as immense a well-being as you have ever felt.

The possibility is that if these pyramids are used widely, man’s life can be prolonged. If it becomes a routine exercise for every child, in every home, in every school, in every college, life can be stretched up to three hundred years. Just one hour every day inside the pyramid, and you are not to do anything, just sit there. It is helpful in both ways: It will preserve your life, and that one hour of well-being will give you a deep feeling of meditation. The people who created the pyramids must have been mystics who had come to such a clarity, to see things which are not available to us.

I want my people to be seekers of truth. But never forget that you have to bring a revelation into the moral codes of humanity, too. You should not feel satisfied that you have found the truth, and you have found what is good. You should make your good as much manifest and available to humanity as possible. The same is applicable to beauty. One feels a great loss… if Buddha had painted, or composed music, or sang songs, or once in a while danced with his disciples, the world would have been immensely enriched.

I say to you, remember in those moments when you realize the truth that a great responsibility has fallen on your shoulders: you have to change the ordinary morality into a spiritual code, and you have to change subjective art into objective art. This will be the new expression of the contemporary mystic, and it will make a new breakthrough for the future.

Let your search be for the truth, and only on the margin go on practicing your music, composing your songs; so when you reach to your enlightenment you are articulate enough to bring beauty to expression. Then you can go laughing, fulfilled, without any tears.

From The Razor’s Edge, Discourse #10 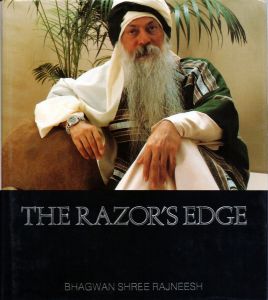