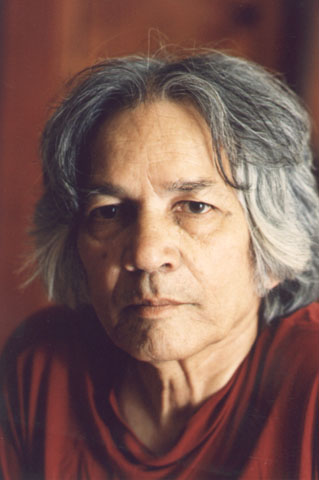 “If you have the courage to touch life for the first time, you will never know what hit you.  Everything man has thought, felt and experienced is gone, and nothing is put in its place.”

“We don’t want to be free from fear. All that we want to do is to play games with it and talk about freeing ourselves from fear.”

“Your constant utilization of thought to give continuity to your separate self is ‘you’. There is nothing there inside you other than that.”

“When the movement in the direction of becoming something other than what you are isn’t there any more, you are not in conflict with yourself.”  -U.G.

You know that there is something different about U.G. Krishnamurti when you read the disclaimer on the first page of his book, “Mind is a Myth”:

My teaching, if that is the word you want to use, has no copyright. You are free to reproduce, distribute, interpret, misinterpret, distort, garble, do what you like, even claim authorship, without my consent or the permission of anybody.

This disarming introduction may elicit a bemused smile, but it hardly prepares the reader for what follows. To read U.G. is to be introduced to a “spiritual terrorist”: he overturns all of our accepted beliefs — God, mind, soul, enlightenment, religion, humanity, heart, love, relationships — and gives us a totally different picture of who we are. The result is a grenade in the brain.

People who come across this odd little man are indelibly marked by a strange and lasting impression that each one finds difficult to define. People report that they are either deeply shaken or overtaken by curiosity after a few minutes talking with him. He doesn’t offer hope, love, peace or spiritual salvation. On the contrary, his words are rather deflating. He discourages people from coming to see him and most often politely turns them away. Yet he is the most talked about thinker in India, and his biography, recently published by Penguin in India, has topped the best seller list for the last nine months.

U.G. endlessly repeats: “I have no message for mankind.” Yet, ironically, thousands of people the world-over feel otherwise and flock to U.G.’s unique brand of discourse. But that isn’t easy because U.G. organizes no gatherings, gives no lectures, offers no courses, pushes no method, peddles no mantras, has no organization, no office, no secretary, no telephone number, no fax and no fixed address. Like his growing legend, U.G. is everywhere and nowhere. He stays with friends or in small rented apartments and tries to stay one step ahead of the crowds who try to discover his whereabouts as soon as the word spreads that “U.G.’s in town” — be it in San Francisco, New York, London, Bombay, Bangalore, Sydney, Auckland, or Beijing. U.G. has no worldly belongings other than what he can fit into a small 10 lb. suitcase. He dresses simply and looks quite ordinary. He never stays in one place for more than two months. He is like the Howard Hughes of the guru set: enigmatic, brilliant, charismatic, reclusive and publicity-shy.

Never has a `philosopher’ become so famous while emphatically denying that he even has a philosophy. Yet, what makes a man who so avidly shuns publicity so talked about? How does one who never gives a public lecture get such a following? How does a “guru” with no organization get such media attention? U.G. is India’s most controversial teacher and categorizing him is extremely difficult. He has been called “the anti-guru”, “the un-guru”, the “seer with no solutions”, “the raging sage”, “the thinker who shuns thought” and “the anti-Krishnamurti”, referring to his namesake, J. Krishnamurti, U.G.’s better known contemporary with whom he shares no family tie.

If any comparison makes sense, U.G. could be likened to a modern day cross between Socrates and Diogenes. However, he differs from the former because he undercuts the cornerstone of the Socratic method: discourse. U.G. isn’t out to convince, convert, win over or influence anyone; and he differs from the latter because nothing in his manner or bearing is provocative or outlandish. However, he is similar to Socrates in that he has a disarming and implacable logic, and akin to Diogenes because he shows no deference to money, power, position, or prestige. In a very real sense, U.G. is a unique witness to that elusive wisdom that has been the hallmark of every great mystic who has ever lived.

And like a mirror, he is a fascinating witness to our era as well.

Mind is a Myth

The Mystique of Enlightenment

All of the posts from U.G. Krishnamurti