11. What is the means for constantly holding on to the thought ‘Who am I?’

R.M. When other thoughts arise, one should not pursue them, but should inquire: ‘To whom do they arise?’ It does not matter how many thoughts arise. As each thought arises, one should inquire with diligence, “To whom has this thought arisen?”. The answer that would emerge would be “To me”. Thereupon if one inquires “Who am I?”, the mind will go back to its source; and the thought that arose will become quiescent. With repeated practice in this manner, the mind will develop the skill to stay in its source. When the mind that is subtle goes out through the brain and the sense organs, the gross names and forms appear; when it stays in the heart, the names and forms disappear. Not letting the mind go out, but retaining it in the Heart is what is called “inwardness” (antarmukha). Letting the mind go out of the Heart is known as “externalisation” (bahir-mukha). Thus, when the mind stays in the Heart, the ‘I’ which is the source of all thoughts will go, and the Self which ever exists will shine. Whatever one does, one should do without the egoity “I”. If one acts in that way, all will appear as of the nature of Siva (God).

12. Are there no other means for making the mind quiescent?

Like the practice of breath-control. meditation on the forms of God, repetition of mantras, restriction on food, etc., are but aids for rendering the mind quiescent.

Through meditation on the forms of God and through repetition of mantras, the mind becomes one-pointed.  The mind will always be wandering. Just as when a chain is given to an elephant to hold in its trunk it will go along grasping the chain and nothing else, so also when the mind is occupied with a name or form it will grasp that alone. When the mind expands in the form of countless thoughts, each thought becomes weak; but as thoughts get resolved the mind becomes one-pointed and strong; for such a mind Self-inquiry will become easy. Of all the restrictive rules, that relating to the taking of sattvic food in moderate quantities is the best; by observing this rule, the sattvic quality of mind will increase, and that will be helpful to Self-inquiry.

13. The residual impressions (thoughts) of objects appear wending like the waves of an ocean. When will all of them get destroyed?

R.M. As the meditation on the Self rises higher and higher, the thoughts will get destroyed.

14. Is it possible for the residual impressions of objects that come from beginningless time, as it were, to be resolved, and for one to remain as the pure Self?

R.M. Without yielding to the doubt “Is it possible, or not?”, one should persistently hold on to the meditation on the Self. Even if one be a great sinner, one should not worry and weep “O! I am a sinner, how can I be saved?”; one should completely renounce the thought “I am a sinner”; and concentrate keenly on meditation on the Self; then, one would surely succeed. There are not two minds – one good and the other evil; the mind is only one. It is the residual impressions that are of two kinds – auspicious and inauspicious. When the mind is under the influence of auspicious impressions it is called good; and when it is under the influence of inauspicious impressions it is regarded as evil.

The mind should not be allowed to wander towards worldly objects and what concerns other people. However bad other people may be, one should bear no hatred for them. Both desire and hatred should be eschewed. All that one gives to others one gives to one’s self. If this truth is understood who will not give to others? When one’s self arises all arises; when one’s self becomes quiescent all becomes quiescent. To the extent we behave with humility, to that extent there will result good. If the mind is rendered quiescent, one may live anywhere.

15. How long should inquiry be practised?

R.M. As long as there are impressions of objects in the mind, so long the inquiry “Who am I?” is required. As thoughts arise they should be destroyed then and there in the very place of their origin, through inquiry. If one resorts to contemplation of the Self unintermittently, until the Self is gained, that alone would do. As long as there are enemies within the fortress, they will continue to sally forth; if they are destroyed as they emerge, the fortress will fall into our hands. 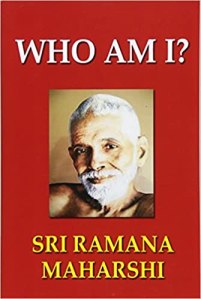 From Who Am I?