In the morning as I meet the dawn, I remember that my heart contains the God, the Beloved, who has not yet been defined and described. I remember that it is He who vibrates within my heart, enables me to breathe, to talk, to listen, to move. When I am thus aware, that it is He who lives and moves within me, then the three phases of consciousness, jagrat, swapna, sushupti : wakefulness, dreaming, and profound sleep, they are transcended into turiya, the fourth dimension, which is behind the wakefulness, the dream-consciousness, and the sleep-consciousness.

When I thus remember, that the underlying current behind the wakefulness, the dream, and the sleep-consciousness is He, who lives and moves within me, then that awareness gives me sat chit sukham, the flavor of the truth, the reality, and the bliss that is the nature, the basic primary nature of life.

Sat chit sukham. When I am always thus aware of the real nature of life, then I arrive at paramahan sagatim turiyam. I arrive at a state of being that has been called by the ancient wise Indians “Paramahansa”, a swan that swims through the waters of duality. That is how a sanyasi is called a paramahansa, one who lives in the renunciation of that austere awareness that it is not he who lives, as separate from the universe, but that he is only an expression of the universal.

The state of paramahansa is the state where a person is aware that he is not a conglomeration of sense organs and only the five elements, but he is the nishkala Brahman, the supreme Brahman, the divinity, who has taken the dense form of a mind and a physical body.

But my mind, when I am awake, needs some work to do. It cannot remain without movement. So I give it a job. “Pratara bhajami manaso” – by the mind – “vachasam agamyam” – by the mind I move. On the frontiers of the mind I give the mind a job to explore that which lies beyond its own frontiers, that which is not accessible to the word, to the speech, as well as to the mind.

All the Upanishads and the Vedas have been searching for that source of sound. That source of breath. They arrived only at two words: na iti, na iti: it is “not this”, it is “not this.” So even the Vedas arrive at the point where nothing can describe and define. The source can only be experienced, the source can only be perceived and understood, but never defined and described. That is how the mind becomes silent. Not because I ask it, but while it is searching for the source of its own activity it takes a dive deep into silence, where the mind becomes the no-mind, where the knowing becomes the not-knowing.

Then I understand that silence is the only speech through which life speaks, and I feel blessed when I am in that silence.

But then comes the body. It wants to do something. To worship, to admire, to adore. So I give it a job. I ask my body to bow down before the light of the earth, the sun, who dispels darkness from all the corners of the earth. And I ask my body to expose itself to that darkness dispelling sun – ask it to find out how that sun enters into the body through the doors of the eyes, and through the pores of all the veins and nerves, every pore of my being. I want my body to find out which are the avenues through which the light is received.

And when the body says, “It is the eyes through which the light enters,” I say, “Find out how the eyes can see the light. Is the light outside the eyes, or is it inside?” With the help of the mind, the body travels inward, to find out the source of the light.

So I arrive at the source of light within me. And the awareness of that light dispels the illusion – the illusion and the fear that a man experiences when he sees “rajo bhujangama” : when he sees a rope in the darkness and he mistakes that for a snake, a cobra. I had mistaken the rope of duality for the snake and cobra of misery and sorrow. But the light dispels the darkness and I see that the duality is only a rope that cannot bind me in any way unless I bind myself with it.

That light is the purushottam, that is sanatana – eternal. Purnam – that is perfect. The perfect eternity. The God divine. That is really my nature. I had mistaken the tensions of duality to be me, but then the light dispels all the darkness, and I get rooted back into the ajam, the aychutam – that which can never be swept off its feet. Ajam – that which was never born, and can never die. I am that.

This is the prayer composed by Shankaracharya, the majestic exponent of the philosophy of non-dualism, vedanta or advait. This was sung by Vivekananda very often, and it is really on this prayer that Vivekananda’s “Song of Sanyasin” is based, where he sings, in great ecstasy:

They know not truth who dream such vacant dreams
As father, mother, children wife and friend –
The sexless Self, whose father, whose mother is he?
The self is All in All,
None else exists, and thou art that,
Sanyasin bold, say ‘Om Tat Sat Om’.

Where seekest thou that freedom?
This world nor that can give you.
Thine only is the hand,
That holds the rope that drags thee on.
Then cease lament, let go thy hold!
Sanyasin bold! Say ‘Om Tat Sat Om!’ 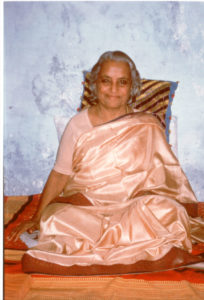 Here is a link to an audio recording of Vimalaji chanting part of the above prayer.   Prayer by Shankarcharya – Vimala Thakar

There are quite a few of Vimala Thakar’s books that are downloadable.