From outside you can study only behavior, you cannot study consciousness; hence, there is a school of psychology called behaviorism. People are behaving as if they are conscious. The physicist’s consciousness is “as if” – a hypothesis, because people are not behaving consciously.

So the first, basic mistake is, they are simply taking an objective view of something which can never become an object, which is always the subject. There is no way to make it an object. And because they are studying it as an object, they are falling into many pitfalls. One is that consciousness is a by-product of biology, physiology, chemistry – of all that man is made of. It is simply a by-product; it is not an independent entity in itself.

It is just like a clock: the hands move, but that movement does not show that inside there is life that is moving them. It is mechanical; you can separate the parts and the movement will stop. You can put them back together again and the movement will start. You cannot do that to man. Take his physiology, chemistry, biology apart, and then try to put them together again – you will have just a corpse, no consciousness. Consciousness is not a by-product.

Consciousness experienced subjectively needs some inward journey. No scientist is doing that. He wants to study consciousness in white mice, in guinea pigs. This is very strange. The scientist has the consciousness in himself, what is the need to go to a white mouse? Go inwards!

And that’s what I call the science of interiority, religio, meditation. You move deeper, leaving your body, your mind, your heartbeat far behind – and, still, you are. And you are more than you have ever been, because you had known yourself filtered through the heart, through the mind, through the body – thick layers. So you had felt your consciousness in a very slight way.

But when you have reached to your own center – which is neither chemical nor physical nor biological– you experience a totally new reality. Immediately you become aware that it is not a by-product, that it has its own existence. The body may die, but this consciousness is so separate from the body that there is no possibility of its dying with the body. The heart may stop, but you are so far away from the heart, you are no longer identified with the heart. You are part of an eternal life.

Man is the highest expression of consciousness.

Science can never know the real being, the real soul, the real consciousness, for the simple reason that it is object-oriented. Hence, a totally different approach is needed, a science which is subject oriented.

That is the purpose of the commune. It is not a religion; it is the science of subjectivity.

So there is a total difference. What they are talking about is absolutely irrelevant. What I am talking about is the real thing. And you need not go anywhere, because it is within you. No lab is needed, no instruments are needed. All that is needed is that you learn how to relax, how to be silent, how to be just a witness. And slowly, slowly your mind stops its unnecessary chattering, your heart stops its moods, feelings.

And suddenly you are your reality, your consciousness.

You are fortunate to be a human being, because this gives you an opportunity to turn in.

From From Bondage to Freedom, Discourse #24 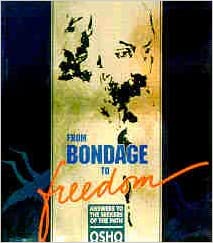 3 thoughts on “The Science of Interiority – Osho”