Osho, it feels that to be a witness is also a kind of thought. So what is the difference between the witness and a thought of the witness?

It is not a thought at all, it is a state of no-thought, no-mind. You are simply reflecting whatsoever is passing by.

The moment you say, “Aha! This is witnessing. So I am witnessing. This is what meditation is. This is awareness,” you have missed the point. You have fallen back into the mud of the mind. You are no longer a witness. You have become identified. Witnessing cannot be reduced to a thought.

Secondly: we have become so conditioned to immediately reducing every experience into a thought. We never allow any experience to remain just a pure experience, even for a few moments.

You come across a beautiful rose flower in the garden. The moment you see it, almost instantly you say inside, “How beautiful!” You can’t let that beauty sink in. The thought of beauty becomes a barrier. The moment you say, “How beautiful!” you have already started comparing it with other roses that you have seen in the past. You have started comparing it with all that you have heard about roses. You are no longer seeing this rose. You are missing its suchness. You have gone into the past. You are searching in your memory to discover how many roses you have seen before: “And this is the best one.” But this rose is no longer there in your awareness. Your awareness has become very clouded. So much smoke has come from the past, so much dust has arisen that your mirror is no longer reflecting the beauty. You are not now-here.

Allow the rose and its fragrance and its beauty and its dance in the wind and the sun to penetrate you. Don’t bring your mind in. There is no need to say that this is beautiful. If it is, there is no need to say it; if it is not, then it is false to say it. Either it is or it is not. To create a thought about it in any way is to create ripples in your consciousness. It is like throwing a pebble into a silent lake. Just a moment ago it was reflecting the moon and the stars so beautifully, and your pebble has created ripples, and the moon and the stars have all become distorted.

That’s what happens whenever a thought arises in you: your consciousness is disturbed, starts wavering. Waves start arising in you. Now you are not capable of reflecting that which is.

It will take a little time – old habits die hard – but one day it happens. If you persist, if you are patient enough, if you go on and on working at cleaning your inner world, one day it happens. And the benediction of that day is immense. In fact, that day you are born anew. You start seeing the same world with new eyes because your eyes are so clear, your mirror reflects so deeply, so totally, without distortion, that trees – the same trees that you have seen before thousands of times – are far more green than they have ever been. And their greenness is no ordinary greenness: it is luminous, it is radiating light.

It will take a little while to drop this mind. It has dominated you for so long that it is difficult in the beginning to suddenly disassociate yourself from it. It clings. It can’t leave its power over you so easily. Hence it goes on coming in from the back door.

You are sitting silently and a beautiful stillness arises, and the mind comes in from the back door and says, “Look, how beautiful this moment is!” And it has taken you away! It came so silently, without making any noise, and you were caught by it in such a subtle way that you could not have been aware of it. You rejoiced, you thanked the mind… but it has destroyed your stillness.

When stillness is really true there is no mind to say anything about it. When witnessing is true you are simply a witness. You don’t think, “I am witnessing.” There is no “I,” there is no thinking, there is only the witness, because all thinking, and the “I” – they have all become contents, objects of your witnessing. And witnessing itself cannot be its own object. No mirror can reflect itself. Your eyes cannot see themselves. Your witness cannot witness itself, that’s impossible.

Your question is relevant. And you will have to be very, very careful, watchful. It is a razor’s edge. One has to be very cautious because if you fall, you fall into a deep abyss. The ordinary people cannot fall; they have nowhere to fall to – they are already at the bottom. But as you start moving higher, the possibility of falling down grows every day. When you reach the Everest of your consciousness, just a little slip, just a little wrong step, and you will go rolling down into a deep abyss.

The greater the meditation, the greater the danger of losing it – naturally; only a rich man can be robbed, not a poor man. That’s why a beggar can sleep under a tree in the afternoon and the noise of the traffic and the marketplace… nothing disturbs him. He can sleep anywhere, he can sleep deeply. He has nothing to lose – no fear.

Once, at night, a king came across a very strange man, a very luminous man, standing alert underneath a tree – so silent, so quiet and so alert. The king was curious: ‘Why is he standing there?” From his appearance he looked like a monk, one who has renounced the world. The king was a very cultured man and he thought, “It is not right to disturb him.” But every night it happened.

Every night he would come across this man. He saw this man so many times that it became impossible to resist the temptation. One day he approached him and asked, “Excuse me, sir, I should not interfere – you look so silent – but why do you go on standing the whole night? What are you guarding? Is there any treasure underneath this tree?”

The mystic laughed. He said, “Not underneath this tree, but within me there is a treasure and I am watching it. And the treasure is growing every day, it is becoming bigger and bigger, hence I have to be more and more alert.”

The mystic said to the king, “You can sleep, you have nothing to lose. I cannot, I have much to lose; and if I can remain awake I have much to gain.”

The king was very much impressed. He asked him to come to his palace, he invited him. The monk agreed. The king was a little puzzled: a monk agreeing so soon without even refusing once is not thought to be right. A monk should say, “No, I cannot come to the palace. I have renounced the world. It is all futile. It is all dream, illusion, maya I cannot come back to the world. I am happy wherever I am.”

But this monk didn’t say anything. He was a Zen Master. The king started thinking in his mind, “Have I been deceived by this man? Was he simply standing there every night just to catch hold of me?”

But now it was too late; he had invited him. The mystic came to the palace, lived with the king. And, of course, he lived more joyously than the king because he had no worries, no cares about the empire, no problems and no anxieties. He enjoyed good food, and the king had given him the best room in the palace – he lived just like an emperor!

Six months passed. Now the king was boiling within himself to ask him, “What kind of renunciation is this? You are enjoying everything – servants and good food and good clothes and a beautiful palace.”

One day, walking in the garden, he asked the mystic, “Can I ask you a question? Forgive me if you feel offended. This is my question: What is the difference now between me and you?”

I was expecting it at any moment. There is no question of my feeling offended – it is a natural question. “There is a difference, but it is very subtle. And if you really want to know the difference, then come with me. I cannot tell you here. I will tell you in a certain space, at a certain place. Come along with me.”

They both went outside the city. The king said, “Now can you tell me?”

The mystic said, “Come along.”

When they were crossing the boundary of his empire – it was evening – the king said, “What are you doing? Where are you taking me? Now this is the end of my empire. We are entering somebody else’s kingdom and I would like to be answered. What is your answer? And I am feeling very tired.”

And the mystic said, “My answer is that I am going. Are you coming with me or not? I am not going back.”

The mystic said, “That’s the difference. But I am going!”

Again the king saw the light, the beauty of the man, and fell at his feet. He said, “Come back! I am just stupid. I have missed these six months. I have been thinking things which are really ugly. Forgive me and come back.”

The mystic said, “There is no problem for me. I can come back, but you will again think the same. It is better for me now to go ahead – that story is finished, that chapter is closed – so that you can remember the difference.”

The witness is irreducible to any thought; it always goes on sliding back. You cannot catch hold of it through any thought. It can witness each and every thought, the thought of witnessing included; hence, it can never itself become a thought.

Next time when you are meditating, Satyendra Saraswati, remember it. Don’t start enjoying the thought that “This is a beautiful moment. My mind is silent, my being is still. This is witnessing!” The moment you say it, you have lost it. 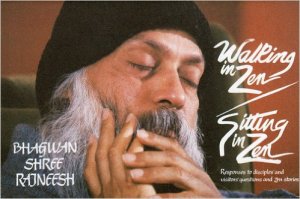