1. What is the state of attainment of knowledge?

It is firm and effortless abidance in the Self in which the mind which has become one with the Self does not subsequently emerge again at any time. That is, just as everyone usually and naturally has the idea, ‘I am not a goat nor a cow nor any other animal but a human’, when he thinks of his body, so also when he has the idea ‘I am not the principles (tattwas) beginning with the body and ending with sound (nada), but the Self which is existence, consciousness and bliss, the innate self-consciousness (atma prajna)’, he is said to have attained firm knowledge.

2. To which of the seven stages of knowledge (jnana bhoomikas)1 does the sage (jnani) belong?

He belongs to the fourth stage.

1 The seven jnana bhoomikas are:

(i). subheccha (the desire for enlightenment).

3. If that is so why have three more stages superior to it been distinguished?

4. As liberation is common to all, why is the varistha (lit., the most excellent) alone praised excessively?

So far as the varistha’s common experience of bliss is concerned, he is extolled only because of the special merit acquired by him in his previous births, which is the cause of it.

5. As there is no one who does not desire to experience constant bliss what is the reason why all sages (jnanis) do not attain the state of varistha?

It is not to be attained by mere desire or effort. Karma (prarabdha) is its cause. As the ego dies along with its cause even in the fourth stage (bhoomika), what agent is there beyond that stage to desire anything or to make efforts? So long as they make efforts they will not be sages (jnanis). Do the sacred texts (srutis) which specially mention the varistha say that the other three are unenlightened persons?

6. As some sacred texts say that the supreme state is that in which the sense organs and the mind are completely destroyed, how can that state be compatible with the experience of the body and the senses?

If that were so there would not be any difference between that state and the state of deep sleep. Further, how can it be said to be the natural state when it exists at one time and not at another? This happens, as stated before, to some persons according to their karma (prarabdha) for some time or till death. It cannot properly be regarded as the final state. If it could it would mean that all great souls and the Lord, who were the authors of the Vedantic works (jnana granthas) and the Vedas, were unenlightened persons. If the supreme state is that in which neither the senses nor the mind exist and not the state in which they exist, how can it be the perfect state (paripurnam)? As karma alone is responsible for the activity or inactivity of the sages, great souls have declared the state of sahaja nirvikalpa (the natural state without concepts) alone to be the ultimate state.

7. What is the difference between ordinary sleep and waking sleep (jagrat sushupti)?

Turiya means that which is the fourth. The experiencers (jivas) of the three states of waking, dreaming and deep sleep, known as visva, taijasa and prajna, who wander successively in these three states, are not the Self. It is with the object of making this clear, namely that the Self is that which is different from them and which is the witness of these states, that it is called the fourth (turiya). When this is known, the three experiencers disappear and the idea that the Self is a witness, that it is the fourth, also disappears. That is why the Self is described as beyond the fourth (turiyatita).

9. What is the benefit derived by the sage from the sacred books (srutis)?

The sage who is the embodiment of the truths mentioned in the scriptures has no use for them.

10. Is there any connection between the attainment of supernatural powers (siddhis) and liberation (mukti)?

Enlightened enquiry alone leads to liberation. Supernatural powers are all illusory appearances created by the power of maya (mayashakti). Self-realization which is permanent is the only true accomplishment (siddhi). Accomplishments which appear and disappear, being the effect of maya, cannot be real. They are accomplished with the object of enjoying fame, pleasures, etc. They come unsought to some persons through their karma. Know that union with Brahman is the real aim of all accomplishments. This is also the state of liberation (aikya mukti) known as union (sayujya).

11. If this is the nature of liberation (moksha) why do some scriptures connect it with the body and say that the individual soul can attain liberation only when it does not leave the body?

It is only if bondage is real that liberation and the nature of its experiences have to be considered. So far as the Self (Purusha) is concerned it has really no bondage in any of the four states. As bondage is merely a verbal assumption according to the emphatic proclamation of the Vedanta system, how can the question of liberation, which depends upon the question of bondage, arise when there is no bondage? Without knowing this truth, to enquire into the nature of bondage and liberation, is like enquiring into the nonexistent height, colour, etc., of a barren woman’s son or the horns of a hare.

12. If that is so, do not the descriptions of bondage and release found in the scriptures become irrelevant and untrue?

No, they do not. On the contrary, the delusion of bondage fabricated by ignorance from time immemorial can be removed only by knowledge, and for this purpose the term ‘liberation’ (mukti) has been usually accepted. That is all. The fact that the characteristics of liberation are described in different ways proves that they are imaginary.

13. If that is so, are not all efforts such as study (lit., hearing) reflection, etc., useless?

No, they are not. The firm conviction that there is neither bondage nor liberation is the supreme purpose of all efforts. As this purpose of seeing boldly, through direct experience, that bondage and liberation do not exist, cannot be achieved except with the aid of the aforesaid practices, these efforts are useful.

14. Is there any authority for saying that there is neither bondage nor liberation?

‘Bondage’ and ‘liberation’ are mere linguistic terms. They have no reality of their own. Therefore they cannot function of their own accord. It is necessary to accept the existence of some basic thing of which they are the modifications. If one enquires, ‘for whom is there bondage and liberation?’ it will be seen, ‘they are for me’. If one enquires, ‘Who am I?’, one will see that there is no such thing as the ‘I’. It will then be as clear as an amalaka fruit in one’s hand that what remains is one’s real being. As this truth will be naturally and clearly experienced by those who leave aside mere verbal discussions and enquire into themselves inwardly, there is no doubt that all realized persons uniformly see neither bondage nor liberation so far as the true Self is concerned.

16. If truly there is neither bondage nor liberation what is the reason for the actual experience of joys and sorrows.

They appear to be real only when one turns aside from one’s real nature. They do not really exist.

17. Is it possible for everyone to know directly without doubt what exactly is one’s true nature?

Undoubtedly it is possible.

It is the experience of everyone that even in the states of deep sleep, fainting, etc., when the entire universe, moving and stationary, beginning with earth and ending with the unmanifested (prakriti), disappear, he does not disappear. Therefore the state of pure being which is common to all and which is always experienced directly by everybody is one’s true nature. The conclusion is that all experiences in the enlightened as well as the ignorant state, which may be described by newer and newer words, are opposed to one’s real nature. 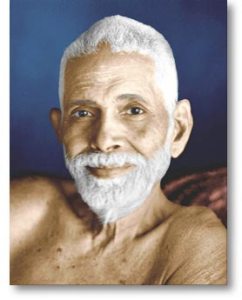 The entire book can be downloaded from Ramana Maharshi downloadable books.