When you are not doing anything the energy moves towards the center, it settles down towards the center. When you are doing something the energy moves out. Doing is a way of moving out. Non-doing is a way of moving in. Occupation is an escape. You can read the Bible; you can make it an occupation. There is no difference between religious occupation and secular occupation: all occupations are occupations, and they help you to cling outside your being. They are excuses to remain outside.

But people who are engaged outside with worldly things or non-worldly things, but occupied all the same, they think – and they have created a rumor around it, they have their own philosophers – they say that if you are introvert you are somehow morbid, something is wrong with you. And they are in the majority. If you meditate, if you sit silently, they will joke about you: “What are you doing? – gazing at your navel? What are you doing? – opening the third eye? Where are you going? Are you morbid?…because what is there to do inside? There is nothing inside.

Inside doesn’t exist for the majority of people, only the outside exists. And just the opposite is the case – only inside is real; outside is nothing but a dream. But they call introverts morbid, they call meditators morbid. In the West they think that the East is little morbid. What is the point of sitting alone and looking inwards? What are you going to get there? There is nothing.

David Hume, one of the great British philosophers, tried once… because he was studying the Upanishads and they go on saying: Go in, go in, go in – that is their only message. So he tried it. He closed his eyes one day – a totally secular man, very logical, empirical, but not meditative at all – he closed his eyes and he said, “It is so boring! It is a boredom to look in. Thoughts move, sometimes a few emotions, and they go on racing in the mind, and you go on looking at them – what is the point of it? It is useless. It has no utility.”

And this is the understanding of many people. Hume’s standpoint is that of the majority: What are going to get inside? There is darkness, thoughts floating here and there. What will you do? What will come out of it? If Hume had waited a little longer – and that is difficult for such people – if he had been a little more patient, by and by thoughts disappear, emotions subside. But if it had happened to him he would have said, “That is even worse, because emptiness comes. At least first there were thoughts, something to be occupied with, to look at, to think about. Now even thoughts have disappeared; only emptiness….What to do with emptiness? It is absolutely useless.”

But if he had waited a little more, then darkness also disappears. It is just like when you come from the hot sun and you enter your house: everything looks dark because your eyes need a little attunement. They are fixed on the hot sun outside; comparatively, your house looks dark. You cannot see, you feel as if it is night. But you wait, you sit, you rest in a chair, and after few seconds the eyes get attuned. Now it is not dark, a little more light….You rest for an hour, and everything is light, there is no darkness at all.

If Hume had waited a little longer, then darkness also disappears. Because you have lived in the hot sun outside for many lives your eyes have become fixed, they have lost flexibility. They need tuning. When one comes inside the house it takes a little while, a little time, patience. Don’t be in a hurry.

In haste nobody can come to know himself. It is a very, very deep awaiting. Infinite patience is needed. By and by darkness disappears. There comes a light with no source. There is no flame in it, no lamp is burning, no sun is there. A light, just like it is morning: the night has disappeared, and the sun has not risen…. Or in the evening – the twilight, when the sun has set and night has not yet descended. That’s why Hindus call their prayer time sandhya. Sandhya means twilight, light without any source.

When you move inwards you will come to the light without any source. In that light, for the first time you start understanding yourself, who you are, because you are that light. You are that twilight, that sandhya, that pure clarity, that perception, where the observer and the observed disappear, and only the light remains. 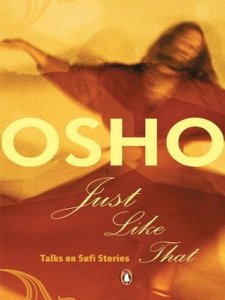 One thought on “A Light With No Source – Osho”