Question:  Bhagavan (Ramana Maharshi) once remarked that free will is non-existent, that all our activities are predetermined and that our only real choice is either to identify with the body that is performing the actions or with the underlying Self in which the body appears.

Someone once said to him: ‘If I drop this fan, will that be an act that has always been destined to happen in this moment?’

And Bhagavan replied, ‘It will be a predestined act’.

I assume that these predestined acts are all ordained by God, and that as a consequence, nothing happens that is not God’s will, because we, as individuals, have no power to deviate from God’s ordained script.

A question arises out of this. If I remember the Self, is this God’s will? And if I forget to remember at a certain moment, is this also God’s will?

Or, taking my own case, if I make an effort to listen to the sound ‘I-I, is this God’s will, or is it individual effort? 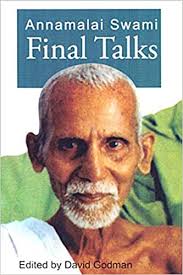 Annamalai Swami:  Forgetfulness of the Self happens because of non-enquiry. So I say, ‘Remove the forgetfulness through enquiry’. Forgetfulness or non-forgetfulness is not a part of your destiny. It is something you can choose from moment to moment. That is what Bhagavan said. He said that you have the freedom either to identify with the body and its activities, and in doing so forget the Self, or you can identify with the Self and have the understanding that the body is performing its predestined activities, animated and sustained by the power of the Self.

If you have an oil lamp and you forget to put oil in it, the light goes out. It was your forgetfulness and your lack of vigilance that caused the light to go out. Your thoughts were elsewhere. They were not on tending the lamp.

In every moment you only have one real choice: to be aware of the Self or to identify with the body and the mind. If you choose the latter course, don’t blame God or God’s will, or predestination. God did not make you forget the Self. You yourself are making that choice every second of your life.