You spoke the other morning about rising through the different levels of consciousness and bringing light to their respective counterparts in the unconscious. Are special techniques needed for this, or will watchfulness of the mind, the body, and the emotions simply bring us through these different levels?

The watchfulness of body, mind and heart is more than enough. No other special techniques are needed, although there are techniques. But as I see them, they are not necessary; on the contrary, they complicate the whole phenomenon. And spiritual growth is not a technological phenomenon, so any technique can become a hindrance. You can start clinging to the technique. That has happened to millions of people.

It happened that one Sufi master was brought to me. He was master of thousands of Mohammedans, and once a year he used to come to the city. A few of the Mohammedans of his group had become interested in me and they wanted a meeting. They highly appreciated that their master sees God everywhere, in everything, and he is always joyful: “We have been with him for twenty years and we have never seen him in any other state except ecstasy.”

I told them, “It will be good that he becomes a guest in my house. For three days you leave him with me. I will take care of your master.” He was an old man, a very good man.

I asked him, “Have you used any technique for this constant ecstasy, or has it come on its own without any technique?”

He said, “I have certainly used a technique. The technique is to remember, looking at everything, that there is God in it. In the beginning it looked ridiculous, but slowly slowly the mind became accustomed: now I see God everywhere in everything.”

“Forty years” – he must have been nearabout seventy.

I asked, “Can you trust your experience of ecstasy?”

Then I said, “Do one thing: for three days you stop the technique… no more remembering that God is in everything. For three days look at things as they are; don’t impose your idea of God. A table is a table, a chair is a chair, a tree is a tree, a man is a man.”

He asked, “But what is the purpose of it?”

I said, “I will tell you after three days.”

But not even three days were needed; after only one day he was angry at me, ferociously angry that, “You have destroyed my forty years’ discipline. You are a dangerous man. I have been told that you are a master, and rather than helping me . . . Now I see in a chair nothing but a chair, in a man nothing but a man; God has disappeared, and with the disappearance of God my ecstasy that I am surrounded by an ocean of God has also disappeared.”

I said, “This was the specific purpose. I wanted you to understand that your technique has produced a hallucination; otherwise forty years’ discipline cannot disappear in one day. You had to continue the technique, so it would continue to create the illusion. Now it is up to you: if you want to live your remaining life in an hallucinatory ecstasy, it is up to you. But if you want to wake up, then no technique is needed.”

A technique creates something; watching simply reveals that which is. It does not create anything; on the contrary, it may destroy a few illusions that were hanging around because you were not watchful enough, so you had never noticed that they were illusory phenomena.

An illusion can be created so easily that mind always enjoys techniques. Who is going to use the technique? The mind will be the master of the technique.

Watchfulness is beyond mind. Mind cannot watch. That is the only thing in existence that mind cannot do. That’s why mind cannot pollute it, mind cannot lead it astray. […]

There have been many people – many so-called great saints, prophets, messiahs – who have lived in hallucination, who never knew about the simple natural process of watchfulness.

It is better that you don’t get involved with any technique. Watchfulness is so pure; don’t pollute it with anything else. And it is so entire, so complete, that it needs no other support. But mind always wants some technique, because mind can control the technique. Mind is a technician; technology is its field. But watchfulness is beyond its control. It is beyond it, it is above it, and in fact it is the death of the mind.

If watchfulness grows in you, mind will die.

And all these people, like Maharishi Mahesh Yogi teaching transcendental meditation, are giving techniques which mind feels perfectly good with. The mind can use it. But there is not going to be any growth. The technique is not bad, but it simply gives you an illusory feeling of well-being – as if you are evolving . . . and you are standing where you have been; there is no evolution, no growth.

All these people are exploiting humanity by giving techniques – and this is the worst exploitation because it stops evolution.

I am against all techniques.

I am for a simple, natural process, which you already have, which once in a while you use.

From From Bondage to Freedom, Discourse #36 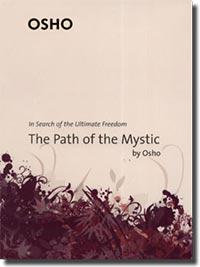