The Upanishads are unique scriptures on this Earth about the mysteries of life, and the Kathopanishad is unique amongst all the Upanishads. Before we enter into this Upanishad, it will be good to understand the inner current that is underlying this Kathopanishad.

The first thing is that in this world, one who wants to know life must himself go through the experience of death. Except for this there is no other way.

To know life one has to learn the art of dying. And the one who is afraid of death will remain unacquainted with life also, because death is the innermost and the most mysterious center of life. Only those who enter into death consciously, with awareness and a welcoming heart, can know this life.

Everyone dies, but not everyone is able to know life just by dying. You have also died many times, and there is the fear that you will still be dying many times more. But death happens to you involuntarily: you do not want to die but you have to die. That is why death is a sorrow, a pain, an anguish. And the pain of death is so intense that the only way to bear it is to become unconscious. Hence, just before dying, you become unconscious, you go into a coma. Surgeons have discovered only recently that becoming unconscious is a way to avoid feeling intense pain—but nature has always known it. The mind goes into unconsciousness; consciousness is lost because of this fear and the pain of death.

For the person who is awake and full of awareness in death, death does not exist. Death exists only for one who dies in unconsciousness. One who dies consciously, for him there is no death; for him, death becomes a door to the deathless, to the eternal.

One who has known death consciously and realized the deathless, the eternal, has no more reason to be bound to the body. You become identified with the body because you are unconscious. Your unawareness is the bridge, the connection with the body. With awareness the identification is broken—you become separate from the body. As the realization of this separation deepens, death disappears—because it is the body that dies and it is the body that is born. The one who is hidden in the body, the bodiless one, is neither born nor does it die. It is the very life itself. How can life die? And the one who dies, his life was only a deception, and illusion, something borrowed. His life does not mean anything.

It is a very interesting thing that man is a combination of two entities: one is the mortal body which is already dead, and the other is the immortal soul which is life itself. It is only because of the proximity of the soul that the body appears to be alive. But the aliveness of the body is borrowed; it is a reflected phenomenon. It is as if you stand before a mirror and see yourself in it: the reflection that appears in the mirror is a borrowed phenomenon, it is not real. The moment you step away from the mirror the image will disappear. It is just a reflection, it is not a reality. It is an indication of the real, and it also hints towards the real—but the one who takes it to be real will go astray. He will be disconnected from the real forever.

The body only gives a hint of the life that is hidden within. The body appears alive only because of its nearness, its proximity, to the soul. The aliveness of the soul is so profound that even the material body seems to be alive. But one who takes the life of the body to be life itself will never know the soul.

To enter into death means to move from the mirror and to enter into the original reality. This is the essence of this Upanishad.

From The Message Beyond Words: A Dialogue with the Lord of Death, Discourse #1 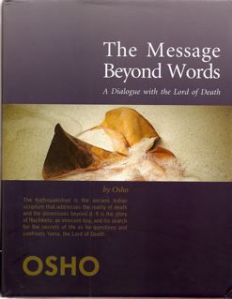