It is said again and again that being aware is enough for transformation. How does it work?

It is a significant question, because if you are aware of your cancer, the cancer will not be cured by just being aware of it – that is true. But as far as psychological transformations are concerned, the moment you are aware of them they disappear – because they do not exist as realities, they exist only as illusions.

You have seen a ghost standing in the dark: now you bring light, and you say there is nobody. Just the shape of the tree was giving you the false impression that somebody was standing there. The ghost has disappeared, because in the first place the ghost was not there. Awareness helps, brings transformation, because the illusions that you are suffering from are not realities. If you become aware of a rock, the rock is not going to disappear. But if you become aware of the ego, the ego is going to disappear, because the ego is not a reality.

“Was you ever in love, Dusty?” asked Walker Long of old Dusty Rhodes one day as they were picking up and putting them down on a railroad right-of-way.

“Yeah, once when I was a young squirt, I was in love,” answered old Dusty.

“Well, you never did get married, did you?” pursued Walker Long.

“How did that happen?”

As far as psychological transformation is concerned, awareness is enough, analysis is not needed.

That is the difference between Eastern and Western psychology: Western psychology is too concerned with analysis. In the East, for five thousand years psychology has existed; it is the most ancient science in the East. But its concern is totally different; it is not at all interested in analyzing, the whole thing seems to be unnecessary.

And now Western psychology is also becoming aware of the fact that analysis leads nowhere. Have you ever come across a person who is totally analyzed? Even Sigmund Freud was not. Nobody can be totally analyzed. You can analyze one dream, but another day another dream arises. You can go on analyzing – people go to the analyst for years, but dreams don’t disappear, they go on coming; analysis does not make them disappear.

But in the East we know the art of making the disappear. So who bothers? It is as if you see a ghost in the dark – there is no ghost, just the form of the tree – and you start analyzing. You never come close to the tree, you never bring light; you start analyzing the form from far away. You can go on analyzing: nothing is going to happen out of that analysis.

Eastern psychology says: Light a candle, bring the candle to the place, and first see whether the ghost exists at all. If the ghost does not exist, then why bother? Why long long years of analysis?

The analyzed goes on pouring out rubbish, and the analyst goes on dissecting, analyzing, labeling and categorizing the rubbish. Much work goes on, and all futile, much ado about nothing.

Chunk by chunk, the problem disappears as you become aware, because you are pulling back energy which you had been pouring into the problem – that was creating the problem. You are taking your energy back, you are not cooperating any more. You were the creator of the problem: you have taken your energy back.

When all energy has been taken back, a moment comes when the problem flops. First become aware of a problem and then become more and more alert. Nothing else is needed; you need not go to any psychoanalyst.

It is one thing to have a problem, but it is another not even to be aware that you have a problem. That is like the eighty-year-old I heard about in Miami. He was vacationing with another octogenarian in Florida. During their stay they both made the acquaintance of some ladies younger than themselves.

They both fell in love and decided to get married in Florida in a double ceremony. Following the wedding night, they are both in their rocking chairs after breakfast.

The one says, “You know, I better see a doctor.”

“Well,” the first said, “I couldn’t consummate the marriage.”

“Oh,” said the second. “I better see a psychiatrist.”

“I didn’t even give it a thought.”

First become aware of your problem, and then go on becoming more and more aware of it. Don’t judge; judgment is an obstacle in becoming aware. Don’t call it any names, don’t evaluate. Don’t say it is good, don’t say it is bad, don’t label, don’t categorize. Just be alert: whatsoever it is, simply mirror it.

You need not take LSD or marijuana or psilocybin. Take a dose of awareness – and life is so beautiful, it is so utterly glorious, it is such an incredible splendor, that no LSD, no marijuana, can add anything to it. All that you need is awareness, and life becomes such a beautiful experience that you cannot imagine that there could be anything better. Ordinary life becomes so luminous.

Life is such a gift, and we go on missing it. And the reason is, between us and life there are so many lies crowding. Your awareness will destroy those lies: they will disappear, and reality will be nakedly encountered.

And to know reality in its utter nakedness is to know God. 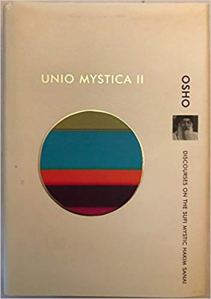 Many of Osho’s books are available online from Amazon.com and in the U.S. from Viha Osho Book Distributors.

One thought on “Being Aware is Enough for Transformation – Osho”