One who is able to maintain a constant state of desirelessness, even towards the most exalted states of enlightenment, and is able to exercise the highest kind of discrimination, enters the state known as ‘the cloud which showers virtue’.

One who is able to maintain a constant state of desirelessness, even towards the most exalted states of enlightenment, and is able to exercise the highest kind of discrimination…

Of course, the ultimate in discrimination will be needed. You will have to be aware – so much so that this very, very deep desire of becoming free of all misery, of becoming free of all bondage, even this desire does not arise. Your awareness is so perfect that not even a small corner is left dark inside your being. You are full of light, illuminated with awareness. That’s why when Buddha is asked again and again, “What happens to a man who becomes enlightened?” he remains silent. He never answers. Again and again he is asked, “Why don’t you answer?” He says, “If I answer, you will create a desire for it, and that will become a barrier. Let me keep quiet. Let me remain silent so I don’t give you a new object for desire. If I say, ‘It is satchitananda: it is truth, it is consciousness, it is bliss,’ immediately a desire will arise in you. If I talk about that ecstatic state of being in God, immediately your greed takes it. Suddenly, a desire starts arising in you. Your mind starts saying, ‘Yes, you have to seek it, you have to find it. This has to be searched. Whatsoever the cost, but you have to become blissful.’” Buddha says, “I don’t say anything about it, because whatsoever I say, your mind will jump on it and make a desire out of it, and that will become the cause, and you will never be able to attain it.”

Buddha insisted that there is no moksha. He insisted that when a man becomes aware, he simply disappears. He disappears as when you blow out a lamp and the light disappears. The word “nirvana” simply means blowing a lamp out. Then you don’t ask where the flame has gone, what has happened to the flame; it simply disappears – annihilated. Buddha insisted that there is nothing left; when you have become enlightened everything disappears, like the flame of a lamp put out. Why? – Looks very negative – but he does not want to give you an object of desire. Then people started asking, “Then why should we try for such a state? Then it is better to be in the world. At least we are; miserable – but at least we are; in anguish – but we are. And your state of nothingness has no appeal for us.”

In India, Buddhism disappeared; in China, in Burma, in Ceylon, in Japan, it reappeared, but it never appeared in its purity again because Buddhists learned a lesson: that man lives through desire. If they insist that there is nothing beyond enlightenment and everything disappears, then people are not going to follow them. Then everything will remain as it is; only their religion will disappear. So they learned a trick, and in Japan, in China, in Ceylon, in Burma, they started talking of beautiful states after enlightenment. They betrayed Buddha. The purity was lost; then religion spread. Buddhism became one of the great religions of the world. They learned the politics of the human mind. They fulfilled your desire. They said, “Yes… Lands of tremendous beauty, Buddhalands, heavenly lands where eternal bliss reigns.” They started talking in positive terms. Again people’s greeds were inflamed, desire arose. People started following Buddhism, but Buddhism lost its beauty. Its beauty was in its insistence that it would not give you any object for desire.

Patanjali has written the best that it is possible to write about the ultimate truth, but no religion has arisen around him, no established church exists around him. Such a great teacher, such a great Master has remained really without a following. Not a single temple is devoted to him. What happened? His Yoga Sutras are read, commented upon, but nothing like Christianity, Buddhism, Jainism, Hinduism, Mohammedanism, exists with Patanjali. Why? – Because he will not give any hope to you. He will not give any help to your desire.

One who is able to maintain a constant state of desirelessness, even towards the most exalted states of enlightenment, and is able to exercise the highest kind of discrimination, enters the state known as ‘the cloud which showers virtue’.

Dharma megha samadhi: this word has to be understood. It is very complex. And so many commentaries have been written on Patanjali, but it seems they go on missing the point. Dharma megha samadhi means: a moment comes when every desire has disappeared. When even the self is no more desired, when death is not feared, virtue showers on you – as if a cloud gathers around your head, and a beautiful shower of virtue, a benediction, a great blessing…. But why does Patanjali call it ‘cloud’? – One has to go even beyond that; it is still a cloud. Before, your eyes were full of vice, now your eyes are full of virtue, but you are still blind. Before, nothing but misery was showering on you, just a hell was showering on you; now, you have entered heaven and everything is perfectly beautiful, there is nothing to complain about, but still it is a cloud. Maybe it is a white cloud, not a black cloud, but still it is a cloud – and one has to go beyond it also. That’s why he calls it ‘cloud’.

That is the last barrier, and of course it is very beautiful because it is of virtue. It is like golden chains studded with diamonds. They are not like ordinary chains; they look very ornamental. They are more like ornaments than chains. One would like to cling to them. Who would not like to have a tremendous happiness showering on oneself, a non-ending happiness? Who would not like to be in this ecstasy forever and ever? But this too is a cloud – white, beautiful, but still the real sky is hidden behind it.

In Christianity, Judaism, Mohammedanism, only two states exist: hell and heaven. This is what Christians call heaven, what Patanjali calls dharma megha samadhi. In the West, no religion has risen beyond that. In India we have three terms: hell, heaven and moksha. Hell is absolute misery; heaven is absolute happiness; moksha is beyond both: neither hell nor heaven. In Western language, there exists not a single term equivalent to moksha. Christianity stops at heaven – dharma megha samadhi. Who bothers anymore to go beyond it? It is so beautiful. And you have lived in so much misery for so long; you would like to remain there forever and ever. But Patanjali says, “If you cling to it, you slip from the last rung of the ladder. You were just close to home. One step more, and then you would have achieved the point of no return – but you slipped. You were just reaching home and you missed the path. You were just at the door – a knock and the doors would have opened – but you thought that the porch was the palace and you started living there.” Sooner or later you will even lose the porch, because the porch exists for those who are going into the palace. It cannot be made an abode. If you make an abode of it, sooner or later you will be thrown out: you are not worthy. You are like a beggar who has started to live on somebody’s porch.

You have to enter the palace; then the porch will remain available. But if you stop at the porch even the porch will be taken away. And the porch is very beautiful, and we have never known anything like that, so certainly we misunderstand – we think the palace has come. We have lived always in anxiety, misery, tension, and even the porch, even to be close to the ultimate palace, to be so close  to the ultimate truth, is so silent, so peaceful, so blissful, such a great benediction, that you cannot imagine that better than that is possible. You would like to settle here.

Patanjali says, “Remain aware.” That’s why he calls it a cloud. It can blind you; you can be lost in it. If you can transcend this cloud – Tatah klesa-karma-nivrttih – Then follows freedom from afflictions and karmas.

If you can transcend dharma megha samadhi, if you can transcend this heavenly state, this paradise, then only… then follows freedom from afflictions and karmas. Otherwise, you will fall back into the world. Have you seen small children play a game called ludo, ladders and snakes? From the ladders they go on rising, and from the snakes they go on coming back. From point ninety-nine, if they reach a hundred they have won the game, they are victorious. But from point ninety-nine there is a snake. If you reach ninety-nine, you are suddenly back, back into the world.

Dharma megha samadhi is the ninety-ninth point, but the snake is there. Before the snake takes hold of you, you have to jump to the hundredth point. Only then, there is abode. You have come back home; a full circle.

From Yoga: The Path to Liberation, Chapter Nine (previously published as Yoga: The Alpha and the Omega, V.10)

I have split the last sutra discourse from the Yoga series into three posts. This is the second of three. The first one is The Virtuous Circle and the third is You Are the Abode of the Ultimate. 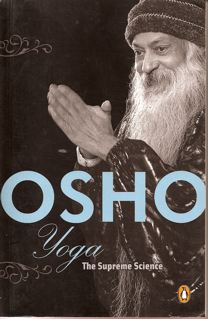 3 thoughts on “The Cloud Which Showers Virtue – Osho”