Last night I saw for the first time that the mind need not be inimical to meditation. Does what you said about the mind accepting enlightenment also apply to its acceptance before enlightenment, of, for example, witnessing? Can the mind acknowledge that witnessing is often more useful than thinking, and so just step aside in those moments without throwing a tantrum?

Mind can only believe that there is enlightenment. At the most the belief is possible – but belief is of no use. The mind has to experience enlightenment in function, not as a belief but as activity. And the same is the case with witnessing: mind will always be against witnessing because it stops mind’s long heritage of thinking. Mind is familiar with thinking; witnessing at the most can become a thought, but it cannot become an actuality.

You have to put mind aside to become a witness, and obviously mind resists it. Who wants to be put aside? – And particularly from a place where the mind has been the master for centuries. And you want to put it aside for something that you don’t know what it is? Mind will not allow you to remain a witness long.

You can try a small experiment. Just put your wristwatch in front of you and start looking at the second hand and remain watching and witnessing. You will be surprised: not even fifteen seconds have passed and you have fallen and forgotten that you are witnessing. Some other thoughts have come. Suddenly you will awaken after a few seconds: “My God, it was only fifteen seconds!”

Not even sixty seconds – one minute – can you persist in witnessing? The force and the flood of mind is too big.

That’s why an articulate master creates strange devices to put the mind aside without making it an enemy, because sooner or later, when you become enlightened, the same mind has to be used as a friend. It is a very useful mechanism. But in the beginning it is going to be against any effort to put it aside.

Meditation is nothing but putting the mind aside, putting the mind out of the way, and bringing a witnessing which is always there but hidden underneath the mind. This witnessing will reach to your center, and once you have become enlightened, then there is no problem. Then bring the mind in tune with you. It is a great art. First you have to put the mind aside, then you have to bring the mind back again, but now it comes as a slave. It used to be the master before, so if you try before enlightenment, it is going to throw all kinds of tantrums. There is no need, because those tantrums will hinder your progress into witnessing. Just don’t create the enemy.

Silently start witnessing, without making a direct attack on the mind. You have to be very careful to reach to the center. Mind will try in every way to take you away for a worldwide tour. And it allures, persuades you, gives you great promises: “Where are you going? What is there inside? The boyfriend is waiting outside the gate and you are going inside. The party is arranged in the Blue Diamond – and who has ever heard of a party inside?”

The mind will create many kinds of things, but you have to very lovingly and carefully put it aside.

Remember my words, lovingly and carefully. Don’t hurt the mind, because the mind will be of much use after enlightenment. Before enlightenment it is your hindrance; after enlightenment it is an immensely complicated mechanism which can be used for all kinds of things. Then it is no more your enemy. Just the master has to be awakened, and once the mind sees the immense light inside you, it spontaneously falls in tune. There is no question of fighting. But before enlightenment the mind will give every fight if you are going to leave it behind or put it aside. This is simple psychology.

Gurdjieff used to say that in a class where the master has gone out, there is havoc. Children are shouting, jumping, fighting, doing whatsoever they always wanted to do, but because of the master…

And then the master comes in and every child is sitting in his place looking into the book. That does not mean that he is reading; that simply means he is showing that he is occupied. There is silence.

Gurdjieff used to say that something almost similar happens when you become enlightened. The master comes in and the mind, seeing the master, suddenly recognizes what his position is. Before such a splendor he is reduced. At that moment you can make friends with the mind; he will be immensely happy to be of any service to the eternity that you have brought with you. But don’t try it before enlightenment: then the mind is going to give you unnecessary trouble. The more you will fight with the mind, the more you will be engaged in mind rather than becoming a witness.

Witnessing is simply slipping out of the mind – a very graceful way, because the moment you start witnessing the very thought process, you have slipped out without creating any fight. You are just watching the caravan of thoughts within you. You are no more part; you are standing aside, by the side of the road, and the traffic is passing. You are not in a fighting mood, you are not even judgmental. You don’t say, “This is good and that is wrong.” Whatever is passing, your whole work is just to see. Soon this silent seeing… and the mind is put aside.

It is witnessing that will take you to enlightenment. After enlightenment mind can be used, can be very significantly used. It is the greatest biological evolution. It has not to be thrown away in the wastepaper basket; it has to be used. But first find the master who can use it. Right now mind is using you. Everybody is a mind slave unless he is enlightened. Then enlightenment is you and mind becomes your slave.

From Isan: No Footprints in the Blue Sky, Discourse #3 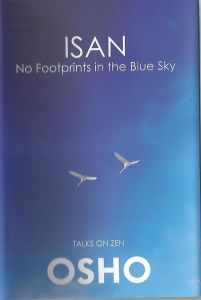 One thought on “Start Witnessing – Osho”