In the morning you said that one who realizes the Brahman thus destroys sin and is well established in Brahman. In this reference, explain the difference between the concept of sin in the Upanishads and in the bible. And also please explain the implications in human life.

There is a very basic difference. To the biblical religions – to Jews, Christians, and even Mohammedans – the concept of sin is totally different than it is to the Hindus and Buddhists. The concept of sin in Christianity, in The Bible, is related to your acts – to what you do. What you do may be a sin, or it may not be a sin; it may be a virtue but it is related to your doing. To the Upanishads, it is not related to the doing at all. What you do is irrelevant; what you are is the point. It is not the doing but the being itself that is significant.

So what will it mean to call a man a sinner? We mean that he is ignorant, unaware of his own self. Because of this ignorance, his acts become sins. The act can become a sin only because the doer is ignorant, unaware, unconscious, is living in a state of sleep. Ignorance is sin and awareness is virtue. Your acts are irrelevant because they are not central; in the center is your consciousness. If something is wrong with the consciousness, your acts will go wrong. If the consciousness is set right, your acts will follow.

So just to go on changing your acts will not lead you anywhere. You can commit a sin, you can repent a sin, you can replace a sin by a virtue, by a virtuous act – but it will not be of any meaning for the Upanishads if you remain the same. Unless you change, your consciousness changes, unless you attain a new plane of being, a new plenitude, just a change of your acts is useless.

The Upanishads say sin is darkness. Bring the light of consciousness and sin disappears. Do not fight with the sin; do not be concerned directly with the sin; do not think in terms of sin. Otherwise you will feel guilty and it will not be a spiritual growth; rather, it will be a fall.

This whole effort of fighting with sins, with wrongdoings, makes you feel guilty and inferior. You start feeling that you are absolutely unworthy, that you cannot do anything. Your spirit is not integrated through this fight; rather, it becomes ill with an inferiority complex, a guilt complex.

The Upanishads say sins are not important. What you do is immaterial, what you are is the point. If you are committing sins it shows only one thing: that you are fast asleep, unaware. So do not fight with the sins; rather, on the contrary, move within and become more and more alert. As alertness grows within, sins disappear without. A moment comes when you are simply a flame of light within, alert to whatsoever you do, alert to whatsoever moves in the mind, alert to whatsoever happens in you. There is no sin then.

I call this approach more scientific, more religious, because it gives man a dignity. If you are concerned with sin as an act, it gives you guiltiness and guiltiness cannot make you religious. And through guilt you cannot feel the divine because your own guilt becomes a barrier. If you are deeply in guilt, you cannot feel in any way grateful to the divine. The gratitude cannot exist there.

The Upanishads touch the being, so they call agyan – ignorance, unawareness – the only sin.

So the sutra says that one who realizes thus destroys sin. Just by realizing the Brahman sins are destroyed – all your past sins. You may have committed many wrong acts through lives and lives; they are accumulated there. And they are also destroyed just by your reaching and touching the innermost core of your being.

How are they destroyed? – Because you are not doing anything to destroy them. The phenomenon is very subtle. It is just like this: you dream in the night that you are committing adultery, you are committing murder, you have burned a whole city – that you have committed many sins. In the morning you are awake. The dream lingers a little, you remember it but you do not feel any guilt about it – or do you feel it? If you still feel some guilt about it, that means you are not yet awake. You are still sleepy and the dream still has a little hangover around you; it is still with you. When you are really alert and awake, you can laugh about the whole thing because it was a dream. Really, you never committed anything.

The Upanishads say this is the happening: when a person is awakened into Brahman, all the lives that he has lived and all that he has done simply disappears like a long dream. With a new awareness, all that is past appears to be illusory, as if it never happened, or as if it happened in a story – a dream-drama.

That is why Upanishads call this world maya – illusory. Not that it is not, not that it is unreal, but because of this happening, when a person awakens into deep meditation, the whole world he has been living in up to now appears dreamlike; it has no substance to it now.

Hence, this sutra: this sutra says when one realizes that, the suchness of existence, the Brahman, all sins are destroyed. Nothing is to be done about them. They simply are no more with you, you have passed them, you have gone beyond them. Now they belong to a past memory with no substance in it. You can relate them as if they were dreams.

While you are awake, while you are in the waking consciousness during the day, what happens?

And then in the morning you are entering waking consciousness again. Now the dream has disappeared, the sleep has disappeared. The same wife, the same house, again start – the same world. Now again you are in Mount Abu. The Upanishads say these three states show that whenever one of these states gets a grip on you, the other two disappear.

The sins, all that you have done, simply disappear because you come to realize your being which is not a doer at all. It has not done anything; it is just a witnessing self. And all that was done, was done by nature – the natural laws.

It is very difficult for the society to understand it. That is why no society exists in the world which has Upanishadic teaching as its basis. No society can exist with it, it is so dangerous a teaching. Hindus go on reading the Upanishads but even they never try to construct a society, to create a society around this teaching, because this is such a high standpoint for looking at things. It says that if a murderer is committing a murder this is how things are – how nature is functioning within him, how nature has become murderous through him. One day, when this man will achieve the final consciousness, he will laugh. He will say, “I never committed this. Just a situation, natural forces, did the whole work.”

But if this is taught right now, this will create a confusion in the mind and a fear that “If this is taught then everyone will commit murder and will say, ‘What can I do? It is how nature is functioning in me.’” This fear is also false because those who commit murder will commit it no matter what you say. We have been giving punishment as much as possible – imprisonment, life sentence, even death – but nothing has changed. Murders go on being committed; rather, they go on increasing.

We have never tried the other alternative. As far as I feel, as far as I know, if we base the society on the Upanishadic teaching, not a single extra murder will be there. Things will remain as they are but there will be more possibility for man to be transformed.

This is difficult because the whole of humanity has been conditioned to believe that man is a sinner and he must be prevented; otherwise he will go on committing sins. He must be imprisoned, punished. He must be tortured so that he is prevented from committing sins. But we have not prevented anyone – not a single man have we been able to prevent.

I have heard that in England, in the old days just two hundred years ago, whenever a thief was caught he was to be flogged naked before the whole town at the crossroads. He would be hanged there and flogged just to teach the whole town what happens if you commit stealing. But then it had to be stopped because the whole village would gather to see the thief being flogged, and the pickpockets would try their art just there on the crowd. And people were so attentive in looking at this torture that they would forget their pockets. So then it became obvious that this was nonsense; no one was learning anything. Exactly there on the spot people were committing stealing, they were doing the exact same thing.

And really, this has been a very long game, very futile because the person who is beating is of the same type. Policemen and thieves, they belong to the same category. Murderers and judges, they belong to the same category. They are just standing on opposite poles but their quality of consciousness is similar. One is committing a sin against the society; another is committing a sin for the society.

The Upanishads say that when you come to the innermost core of being and become alert, totally alert about what has happened, then you know it was prakriti – nature – which was doing all. You have always been a witness – the purusha.

From The Supreme Doctrine, Discourse #17 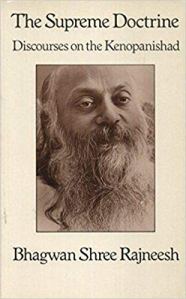