Sahajo, man feels meaningless, empty, hollow within, and wants to fill it, stuff it. The effort to fill it somehow is greed. That effort is bound to fail for the simple reason because whatsoever you accumulate remains on the outside; it cannot reach within you. And the problem is within and the solution you are seeking is without.

For example, you are feeling meaningless inside you and you are trying to fill it by money. It is a stupid effort, unconscious effort, not seeing a simple point: that money can be gathered, accumulated, but it will pile up around you. You can have mountains of money around you… there have been people with mountains of money.

One of the greatest rich men in the world was Andrew Carnegie. He left inestimable treasures, but when he was dying his biographer asked him, “Are you dying contented?”

He opened his eyes and said, “No, I am a very discontented man. My whole life has been a failure. I am dying unfulfilled.”

The biographer was surprised. He said, “But you have so much money! Perhaps nobody else has that much money as you have got. Why should you not be contented and fulfilled?”

Andrew Carnegie laughed and he said, “Yes, the same logic destroyed my whole life. I was also thinking that if I can have that much money then all will be well. Money is there, and I have lost my life in accumulating all this junk, but inside I am as empty as ever, in fact far more empty than ever, because when I was poor…” He was born a poor man. He has not inherited money, he earned his money himself. He worked hard, eighteen hours per day; not even beggars work that hard. He was greed incarnate. His whole life is the story of greed.

And his experience is significant because he says “When I was poor at least there was hope that someday I am going to be rich and then all will be well. Now I have even lost that hope, because I am rich and still my poverty remains the same.”

Greed means a desire for more without seeing the total futility of it. If less is not giving you anything, then it is not going to happen by having more of the same.

On her morning flight through the forest an angel meets a Polack dwarf. The angel says, “Dwarf, I grant you two wishes. Whatever you desire, tell me, and it will be fulfilled.”

The Polack dwarf scratches his head, which helps him to think, and with a big smile says, “Well, if that is so, I would not mind a nice cold draught of beer.”

An enormous tankard of beer immediately appears in front of him. The angel says, “This is an enchanted tankard. You can never empty it. Beer will always be flowing from it. Drunk you get, but never sick of it. Just a taste and you will never forget it. It will quench all your thirst and you will always be drinking from it.”

The Polack dwarf is pleased. He takes a sip, licks his lips, and feels very satisfied with himself.

The angel looks at the dwarf and says, “You still have one more wish.”

“Do I?” he exclaims. “Well, I wouldn’t mind another beer, just like this one.”

Greed is stupidity, Sahajo, utter stupidity. The greedy man is not functioning intelligently. The intelligent person can see it, but what actually is his need? His need basically is to know in the first place “Who am I? – Because unless I know who I am, whatsoever I do is going to be wrong; it is not going to fulfill me. Once I know exactly who I am, then whatsoever I do is going to enhance my richness, my treasures, my bliss, my benediction, because then I will be moving according to my nature.”

The intelligent person is never imitative. He tries to find first, “What is my nature.” He never imitates, he never follows others. He listens to his inner voice.

The first thing to be done is to be so silent, so meditative that you can listen to your own inner voice. It is a very still small voice, but once you listen it, it directs you, and then you never go astray.

There was once a very poor Portuguese whose only possessions were a cart and a donkey. Things were going very badly so he decided to ask for advice from a richer friend.

“Manuel,” said his friend, “the solution is to sell the donkey. In this way you will save the money you spend on feeding the donkey and you can pull the cart yourself. You will see you can do whatever the donkey does.”

Manuel followed his advice and sold his donkey. A few weeks later, while pulling the cart, he met his rich friend.

“So you see, Manuel,” said his friend, “I told you, you could do whatever the donkey did!”

“I can do almost everything, Antonio,” replied Manuel, “except one thing – I still can’t shit while I walk!”

And people are doing that all the time – just imitating others. And then they are always in trouble because they cannot do this and they cannot do that. Somebody is doing that and they are incapable and they feel inferior. The whole world suffers from inferiority complexes in some way or other, for the simple reason that we go on comparing.

In fact, everybody is so unique that all comparison is wrong, utterly wrong. But you don’t know your uniqueness. You have never entered your own being, you have never encountered yourself. You have never looked in that direction at all. You are bound to feel inferior. Even the greatest people of your history, the people you call very great, all feel inferior in some way or other, maybe different ways of feeling inferior, but nobody can really feel superior – he will be missing something. He may not be so beautiful as somebody else, he may not be so healthy as somebody else, he may not be such a great musician as somebody else. He may be a president of a country, but when it comes to singing, a beggar can make him feel inferior. He may be the president of a country, but may not be so rich. There are thousands of other people who are far more richer.

Look within yourself and you will experience great uniqueness. And all inferiority disappears, evaporates; it was created by you and by wrong education, it was created by a subtle strategy – the strategy of comparison. Once you know your uniqueness you are joyous, and then there is no need to follow anybody. Learn from everybody. An intelligent person even learns from idiots, because there are few things you can learn only from idiots because they are experts in idiocy. At least watching them, observing them, you can avoid a few things in your life.

Then, Sahajo, greed disappears. Greed is unacquaintance with oneself. Greed is because you have never looked within yourself, and you feel empty and you go on making all kinds of efforts to fill that emptiness. It cannot be filled. Experience it and you will be surprised: that emptiness looks only empty from the outside; when you go inside it, it is a fullness of its own kind. It is not empty at all; it is vast, it is infinite. It has a tremendous beauty of silence, purity. And then you will not look at it as emptiness in a negative sense; you will start feeling a positive well-being in it. It is spaciousness, not emptiness. It is roominess, not emptiness.

And that’s the message of Zen: to experience your emptiness so totally that the emptiness itself becomes fullness. Then all greed disappears, and that is the only way it disappears; there is no other way.

From Zen: The Special Transmission, Discourse #10 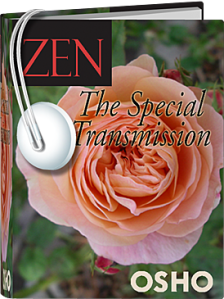