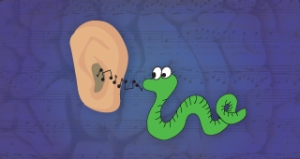 A few years ago sitting and chatting together after a Satsang Meditation one of the guests brought up the subject of earworms.  I suggested that the earworms were asking for attention in order to be released. I find that often we say something with much truth in it but don’t really listen to it ourselves. This time I did listen to what had been said and began to consciously explore this earworm phenomenon. You know earworms, we’ve all experienced them; usually bits of a song that just keep repeating themselves in the mind, and they become really pesky because they won’t leave us alone.

So I decided to pay more attention when one next appeared and found that if I gave it full attention without either singing along or rejecting, it very quickly evaporated. It seemed as if a piece of consciousness had gotten unconsciously attached to a bit of music. And that the only way to release it was to make that piece of unconscious consciousness conscious. It works, at least for me, and it works every time. If it doesn’t it is telling me that I have not given full attention and when I do, poof! It is important to note here that we are not to do anything with the earworm itself. It is the unconsciousness that we are dealing with.

I suspect you have already guessed where this is going and yes, you are right. This is the whole story of watching the mind, exactly the same. We let the comings and goings of the mind appear without either singing along or rejecting them, we make the unconscious consciousness that is tangled up in the impressions of the mind conscious. And again, we are not to do anything with the thoughts themselves but it is our own unconsciousness that we are transforming. And the transformation happens by itself; as J. Krishnamurti has said, “seeing IS transformation.”

This post is from a collection of essays, stories, insights and poems that have occurred to me along the Way titled Here to Now and Behind.