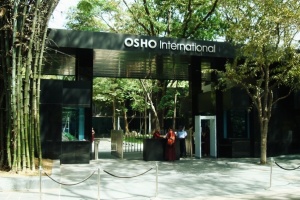 Personally, I do not envy anyone who has the job of keeping the Osho Pune Resort sustainable.

We could not have kept the ashram of Poona One going and certainly not the experiment in Rajneeshpuram going without a tremendous amount of donations. It does not take a genius to realize that once Osho left the body the amount of donations coming in would have dropped precipitously. This simple fact is probably the biggest factor on the difficulty of the finances.

Not only was the management of the resort charged with the task of keeping the resort going, but also, at the same time, to keep as many of Osho’s books in publication as possible, no easy task.

I am sure that it was out of Osho’s wisdom that he made the choice of personnel that he did to see the commune into, and through, the transition.

The effort to monetize the playing of Osho’s videos would appear to be part of that effort. The sale of discourse downloads for $1.99 each seems to be an effort to find the right balance between accessibility and sustainability. To make matters even more difficult, Osho directed that the books be sold as cheaply as possible and still maintain the high quality. I might have used a different strategy to maximize the publication of Osho’s books, but then again, if I had been given the entire picture, I might have concluded that theirs was the best option available.

Another difficulty that management faces is that Osho’s books are being published by others and the income from those books is diverted to support other communes. In addition, there were sites created online in order to distribute audio and video recordings of Osho’s discourses at no cost. While I am sure that all of these efforts were made with good intentions, clearly, they undermine the sustainability project.

In addition, the sustained effort to delegitimize the resort and its management year after year, surely, has to eventually begin to take a toll financially.

And then along comes Covid-19 and suddenly the resort is forced to close its doors to any visitors for almost a year.

So now what do some of us in the sannyas community do? We complain when management tries to find ways to keep the dream alive. Rather than being supportive we are Monday morning quarterbacking. Do you think that Osho would have wanted for us to take a poll, to have a vote?

Personally, I do not have any inside information as to how they are planning to weather this financial storm, but I do truly hope that they are successful, and I am willing to say so publicly.

The management team at Osho International Mediation Resort has written this letter to clarify the current affairs. It was published on OshoNews.

And recently the following letter was posted by Rupa FitzGerald on Facebook.

FAREWELL OSHO BASHO
I have just been sent a petition to sign against the “Osho Ashram” being sold. So, I thought I would clarify what is going on from my vantage point in Pune.
The subdivision containing Basho lagoon, tennis courts etc is in the process of being sold.
The Basho subdivision was purchased and developed to Osho’s design after he had left the body and is easily separated from the rest of the resort, which functioned perfectly well without it, for years. Basho was purchased with money donated by a small number of people, none of whom have any objection to it now being sold.
My own experience of Basho is that it is now pretty much a white elephant, even in the highest point of the season it is used very little and must be extremely expensive to run. If selling it is a way to save the Trust from bankruptcy it is the way forward. IMHO.
It is clear to me that the petition is an excuse to cause ill feeling towards those currently running the Resort. I see it this way because it is factually inaccurate – only Basho is to be sold, no other area – and because a suggestion to crowdfund maintenance of the resort until a cash flow is re-established would be a much better way of keeping Basho, if that was the intention of the petition.
AS SOMEONE WHO HAS EXPERIENCED RUNNING AN OSHO MEDITATION CENTRE I AM FAMILIAR WITH THE SENSE OF OWNERSHIP THAT SOME SANNYASINS AND EX-SANNYASINS DEVELOP OVER ANY ORGANISATION THAT HAS OSHO’S NAME ON IT – HOW ENTITLED TO CRITICISE AND MAKE DEMANDS, WHILE GIVING NOTHING AT ALL THEMSELVES, EXCEPT OPINION AND RUNNING COMMENTARY.
Farewell Basho.

7 thoughts on “A Balance Between Accessibility and Sustainability”