Questioner: As I listen to you, I find that it is useless to ask you questions. Whatever the question, you invariably turn it upon itself and bring me to the basic fact that I am living in an illusion of my own making and that reality is inexpressible in words. Words merely add to the confusion and the only wise course is the silent search within.

Maharaj: After all, it is the mind that creates illusion and it is the mind that gets free of it. Words may aggravate illusion; words may also help dispel it. There is nothing wrong in repeating the same truth again and again until it becomes reality. Mother’s work is not over with the birth of the child. She feeds it day after day, year after year until it needs her no longer. People need hearing words, until facts speak to them louder than words.

Q: So we are children to be fed on words?

M: As long as you give importance to words, you are children.

Q: All right, then be our mother.

Q: Surely, the mother did not carry the child when she was a child herself.

M: Potentially, she was the mother. Go beyond the illusion of time.

Q: Your answer is always the same. A kind of clockwork which strikes the same hours again and again.

M: It can not be helped. Just like the one sun is reflected in a billion dew drops, so is the timeless endlessly repeated. When l repeat: ‘I am, I am’, I merely assert and re-assert an ever-present fact. You get tired of my words because you do not see the living truth behind them. Contact it and you will find the full meaning of words and of silence — both.

Q: You say that the little girl is already the mother of her future child. Potentially — yes. Actually — no.

M: The potential becomes actual by thinking. The body and its affairs exist in the mind.

M: Quite right — you have put it beautifully.

Q: But these are mere words to me. Hearing and repeating them is not enough, they must be experienced.

M: Nothing stops you but preoccupation with the outer which prevents you from focussing the inner. It cannot be helped; you cannot skip your sadhana. You have to turn away from the world and go within, until the inner and the outer merge and you can go beyond the conditioned, whether inner or outer.

Q: Surely, the unconditioned is merely an idea in the conditioned mind. By itself it has no existence.

M: By itself nothing has existence. Everything needs its own absence. To be, is to be distinguishable, to be here and not there, to be now and not then, to be thus and not otherwise. Like water is shaped by the container, so is everything determined by conditions (gunas). As water remains water regardless of the vessels, as light remains itself regardless of the colours it brings out, so does the real remain real, regardless of conditions in which it is reflected. Why keep the reflection only in the focus of consciousness? Why not the real itself?

Q: Consciousness itself is a reflection. How can it hold the real?

M: To know that consciousness and its content are but reflections, changeful and transient, is the focussing of the real. The refusal to see the snake in the rope is the necessary condition for seeing the rope.

Q: Only necessary, or also sufficient?

M: One must also know that a rope exists and looks like a snake. Similarly, one must know that the real exists and is of the nature of witness-consciousness. Of course it is beyond the witness, but to enter it one must first realise the state of pure witnessing. The awareness of conditions brings one to the unconditioned.

Q: Can the unconditioned be experienced?

M: To know the conditioned as conditioned is all that can be said about the unconditioned. Positive terms are mere hints and misleading.

Q: Can we talk of witnessing the real?

M: How can we? We can talk only of the unreal, the illusory, the transient, the conditioned. To go beyond, we must pass through total negation of everything as having independent existence. All things depend.

Q: On what do they depend?

Q: And the witness depends on the real?

M: The witness is the reflection of the real in all its purity. It depends on the condition of the mind. Where clarity and detachment predominate, the witness-consciousness comes into being. It is just like saying that where the water is clear and quiet, the image of the moon appears. Or like daylight that appears as sparkle in the diamond.

Q: Can there be consciousness without the witness?

Q: If the unconditioned cannot be experienced, for all experience is conditioned, then why talk of it at all?

M: A feeling too is a state of mind. Just like a healthy body does not call for attention, so is the unconditioned free from experience. Take the experience of death. The ordinary man is afraid to die, because he is afraid of change. The jnani is not afraid because his mind is dead already. He does not think: ‘I live’. He knows: ‘There is life’. There is no change in it and no death. Death appears to be a change in time and space. Where there is neither time nor space, how can there be death? The jnani is already dead to name and shape. How can their loss affect him? The man in the train travels from place to place, but the man off the train goes nowhere, for he is not bound for a destination. He has nowhere to go, nothing to do, nothing to become. Those who make plans will be born to carry them out. Those who make no plans need not be born.

Q: What is the purpose of pain and pleasure?

M: Do they exist by themselves, or only in the mind?

M: Pain and pleasure are merely symptoms, the results of wrong knowledge and wrong feeling. A result cannot have a purpose of its own.

Q: In God’s economy everything must have a purpose.

M: Do you know God that you talk of him so freely? What is God to you? A sound, a word on paper, an idea in the mind?

Q: By his power I am born and kept alive.

M: And suffer, and die. Are you glad?

Q: It may be my own fault that I suffer and die. I was created unto life eternal.

M: Why eternal in the future and not in the past. What has a beginning must have an end. Only the beginningless is endless.

Q: God may be a mere concept, a working theory. A very useful concept all the same!

M: For this it must be free of inner contradictions, which is not the case. Why not work on the theory that you are your own creation and creator. At least there will be no external God to battle with.

Q: This world is so rich and complex — how could I create it?

M: Do you know yourself enough to know what you can do and what you cannot? You do not know your own powers. You never investigated. Begin with yourself now.

Q: Everybody believes in God.

M: To me you are your own God. But if you think otherwise, think to the end. If there be God, then all is God’s and all is for the best. Welcome all that comes with a glad and thankful heart. And love all creatures. This too will take you to your Self. 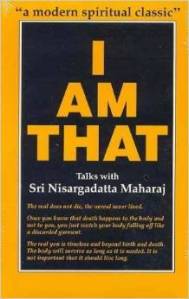 From I Am That, Chapter #39, By Itself Nothing has Existence.

You can read more from Nisargadatta Maharaj here.

You can read more from U.G. Krishnamurti here.

10 thoughts on “By Itself Nothing has Existence – Nisargadatta Maharaj”