The other night I heard you say there is no reincarnation, no soul, no spirit after death, only pure consciousness, pure silence.

Is it then so, that part of us, of our own consciousness, is aware of that endless silence, of being part of the whole?

You have to go beyond thinking, beyond questioning.

Just be silent and you will know.

You are not, only the universe is.

You are just a ripple in the river, arisen in a certain moment and dissolved back again, but not for a single moment separate from the river. This whole existence is nothing but a vast ocean in which all kinds of ripples, tidal waves, arise and disappear, and the ocean remains.

The questioner goes on asking:

Does the dewdrop still feel or experience some aliveness inside, when first it melts into the ocean?

The dewdrop disappearing into the ocean feels for the first time a vast life. Only the boundaries that were making it a small dewdrop have disappeared. The dewdrop is still there, but it is no longer a dewdrop, it has become the ocean.

Both mean the same, but one is the experience of the beginner. The dewdrop disappearing into the ocean feels like you are going into a vast nothingness. But once you have reached into that vastness, when you are no more, suddenly that vastness is you. There will be no self, no sense of I, but a sense of totality, of wholeness.

If I had been present there, I would have said, “It is better to cancel both. Whatever has happened has happened, nothing can be said about it. One thing is certain, there is no more separation. So what has entered into what does not matter. There have been two, now there are not two.”

Gyozan said to Sekishitsu, “Tell me what to believe in and what to rely on?”

What does he mean by gesturing three times to the sky?

Sekishitsu gestured across the sky above, three times with his hand, and said, “There is no such thing . . . You just please drop the very idea of relying on anything, or believing in anything. Just relax. This whole existence is yours. Why do you want to cling to a special part? It is all the same – the same sky, the same silence, the same purity, same innocence.”

Gyozan asked, “What do you say about reading sutras?”

Man wants something. His mind is always finding some way to avoid the nothingness or the wholeness of existence.

Gyozan immediately asked, “If there is nothing to believe and nothing to rely upon, what do you say about reading sutras?”

Sekishitsu replied, “All sutras are out of the question. Doing things that are given by others is dualism of mind and matter. And if you are in the dualism of subject and object, various views arise. But this is blind wisdom, so it is not yet the Tao

Bodhidharma’s statement is of tremendous value. There is not a single thing separate from the whole. All separation, all dualism, is the game of the mind. As the mind becomes silent, all that game disappears, all those players are no longer there.

What happens when you wake up in the morning to your dreams? In the dreams have you ever doubted that what you are seeing is not true? Nobody in a dream can doubt. Whatever appears in the dream, appears to be the right thing at the moment. Only in the morning when you wake up, suddenly do you realize that all the night you have been dreaming of things which were not true, which were just mind creations, flowers in the sky – Bodhidharma’s statement, “Originally, there is not a single thing.”

“You see, when a baby comes out of the womb, does he read sutras or not? At that time, the baby does not know whether such a thing as buddha nature exists of not. As he grows up and learns various views, he appears to the world and says, ‘I do well and I understand.’ But he doesn’t know it is rubbish and delusion.

“Of the sixteen ways of phases of doing, a baby’s way is the best. The time of a baby’s gurgle is compared to a seeker when he leaves the mind of dividing and choosing. That’s why a baby is praised. But if you take this comparison and say, ‘The baby is the way,’ people of the present days will understand it wrongly.”

And that is true even today.

When I am saying to you, “Be nothing,” I am saying in other words, “Be just a newborn baby, a pure consciousness, undivided into knowing and not knowing. The baby’s consciousness is pure. It knows nothing, it does not even know that it is.”

You must have heard small babies talk about themselves as separate persons. They may say, “The baby is hungry. The baby is thirsty.” The “I” takes a little time to grow. It takes at least three to four years for society to create an ego so the baby starts saying “I” – instead of saying, “The baby” is hungry, “I” am hungry. And the moment the baby says, “I am hungry,” he is no longer a baby. He has entered into the world, he has graduated, in a way.

But according to Zen, once again you have to become just like the baby. This second childhood is the greatest revolution possible.

Jesus is right when he says, “Unless you are born again, you will not understand the truth.” He had been traveling for seventeen years in the East, and he had gathered much. And that was really the problem why Jews could not accept him. He was talking a language that was not theirs. He was making interpretations of the old Jewish tradition in a way that had never been heard and that he had brought from the East.

And at that time the whole of the East was full of the vibrations of Gautam Buddha. Just five hundred years had passed since Gautam Buddha was alive, yet his vibrations were in the atmosphere. And there are possibilities that Jesus did not only visit India and Tibet. There is a place in Japan which also proclaims that he visited there. In the Bible these seventeen years are completely missing. They don’t listen to any other argument, because that would be disturbing to whatever they have managed up to now as their Holy Bible.

Jesus was much influenced by Buddha’s teachings. This teaching, “Unless you are born again,” has the flavor of Gautam Buddha who was continuously teaching that you have to drop everything that has been told to you, you have to forget everything that has been programmed in you. Gautam Buddha brings to the world the first deprogramming philosophy. And when you are deprogrammed completely, who are you? – just a pure nothingness, just a silence. All words were borrowed, all sutras were given to you, all religions were forced on your mind. You are not a Christian, and you are not a Hindu, and you are not a Mohammedan. You were born just as pure consciousness.

Buddha, when he became enlightened, for seven days remained silent, wondering whether to say it or not. “Because in every possible way,” he thought, “it will be misunderstood. It is better to be silent.” But a compassionate heart could not be at ease in silence, seeing that “Everybody needs this exploration, this excursion into himself. I know the way, if I remain silent it will be criminal. But if I say anything, then too, I will not be absolutely right in saying it, because that which is beyond the word cannot be brought into the word.”

So after seven days, compassion took over, and finally he tried. For forty-two years he went on saying to people, and always making it clear – “What I am saying, don’t take it literally. I want you to experience it. Only then will you understand the meaning of it – not by hearing me, but by experiencing it. Only by tasting it, will you know the sweetness of it.”

Every river is destined to disappear one day into the ocean. Go dancingly, go joyfully. There is no need to be worried, there is no need to be hurried. The ocean is waiting – you can take your time, but take your time with joy, not with tensions and anxieties. Rejoice and dance and sing and love, and finally you are going to disappear into the ocean. The ocean is always waiting for you.

From The Zen Manifesto: Freedom from Oneself, Discourse #7

Read another post from the same discourse Hara, the Third Eye and Zen. 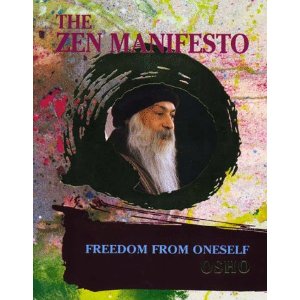 3 thoughts on “The Ocean is Always Waiting – Osho”